NHL Central Scouting Service released its new Players to Watch List today. It's a lengthy document. Pages 1-14 are for US/Canada. Pages 15-22 cover the European Leagues. It's a little thin on the New England Preps and Minnesota High School, as those leagues haven't gotten cranked up yet. That should change with the next list.

Four current or former New England prep players recieved an "A" or "B" ranking. They are RW Oliver Wahlstrom (NTDP/Harvard), who is an "A". The three who received "B" rankings are C Jay O'Brien (Thayer/Providence), RD Michael Kesselring (New Hampton/Merrimack), and LD Mike Callahan (Central Illinois/Providence). A number of others received a "C" ranking.

The 2018 NHL Draft is on June 22nd and 23rd at the American Airlines Center in Dallas, Texas.

In Massachusetts, seven different organizations won a trip to Nationals.

14U Tier I Semifinal: 8:30 am (5) -- Boston Jr. Eagles 5, NV River Rats 0
14U Tier I Semifinal: 8:30 am (4) -- Boston Jr. Terriers 3, Islanders Hockey Club 2
14U Tier I Championship: 3:00 pm (2) -- Boston Jr. Terriers 2, Boston Jr. Eagles 1 (OT) -- Jayden Grier put the Terriers up early in the first with a flukey goal that deflected in off a Jr. Eagle defender. Nolan Joyce got one back in the third with a PPG. But with six seconds left in OT, Jr. Terrier center JP Turner barreled down the left wing and fired a shot far side that beat Ryan Kazmouz for the GWG. The star of this game, in which the Jr. Eagles held a huge margin in time of possession and shots, was Jr. Terriers goalie Layne Browning. In addition, the Terriers played with grit and kept their wits about them when under pressure. The most compelling of the championship games here today. (Despite their loss, the Jr. Eagles, due to their strong season, have a chance of being invited to Nationals as an at-large team.)

18U Tier I Semifinal: 11:00 am (2) -- Little Bruins 6, Boch Militia 1
18U Tier I Semifinal: 11:40 am (7) -- Cape Cod Whalers 5, EMass Senators 3
18U Tier I Championship: 6:00 pm (5) -- Cape Cod Whalers 4, Little Bruins 3 -- In the waning minutes of the third, the Little Bruins had what would have been a game-tying goal waived off when the officials ruled the puck hadn't crossed the goal line. Numerous spectators thought it had, and Little Bruins coach Peter Masters definitely thought so, but his argument didn't convince the referee. The Whalers got goals from Jack Rathbone (2), Ryan Stevens, and Aidan McDonough. All the Little Bruins goals -- from Jack Studley, Andrew Moynihan, and Gunnarwolfe Fontaine -- came in the first period, as did two of the Whalers' goals. Matt Lane (Whalers) and Aidan Porter (Little Bruins) were in net. The Little Bruins had a short bench, as five players were scratches due to injury, including Hunter Brackett, who broke his arm in an earlier game.

16U Tier I Championship: 10:00 am (Olympic) -- Selects Academy 2, Yale 0 -- Selects got goals from PJ Fletcher and Ethan Phillips, and Trevor Giwerowski posted a 42-save shutout.

18U Tier I Championship: 12:30 pm (Olympic) -- Yale 4, NH Avalanche 0 -- Alex Dipaolo (2g,2a) figured in all four Yale goals, and Daniel DeChille (44 saves) let nothing by him. Jacques Bouquot had a goal and an assist, Nick Hale had a goal, and Kevin Wall had a pair of assists.

The Midwest Prep Hockey League will be hosting its Seventh Annual Kick-Off Classic at Cairns Arena in South Burlington, Vt.

The tournament, hosted by Rice Memorial Prep, starts Friday and ends Sunday. This is one of only two chances to see all ten MPHL teams as they play a total of 25 games over the course of the weekend.

There will be a coaches' hospitality area. Programs, rosters, and line charts will be available.

Northeastern recruit Riley Hughes (19) and Liam Gorman (15) -- both juniors -- will be taking on a bigger role for St. Sebastian's this season. (Photo: Dave Arnold Photography) 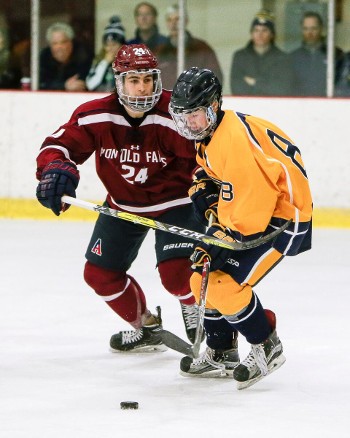