Elite 8: #3 Salisbury 4, #4 Dexter 0 (FINAL) -- Behind a shutout from Nick Haas, goals by Massimo Lombardi, Dean Bauchiero, Lucas Mercuri, and Matt DeBoer (empty-net), and smart, disciplined hockey from start to finish, Salisbury won the 2020 Elite 8 Championship with a 4-0 win over Dexter.

In the first period, Salisbury's Lombardi, off a faceoff to the left of Dexter freshman G Dylan Silverstein, scored the game's first goal -- and the only goal of the period, one best described as a 'feeling out' period.

The pace picked up significantly in the second period. Dexter had the edge in play, but not on the scoreboard as Salisbury capitalized on a couple of Dexter defensive lapses to take a commanding 3-0 lead into the third period. Salisbury's first goal of the period developed off a 3x2 and led to the Bauchiero-Mercuri-DeBoer line bunched in front of Silverstein. The puck deflected off Bauchiero's skate at the 7:57 mark. 2-0, Salisbury. With a couple of minutes left in the period, a Dexter defenseman pinched, was stripped of the puck, and the Lucas Mercuri line was off to the races, Mercurio finishing to make it 3-0 Salisbury.

In the third, Salisbury stuck to its plan, playing sound positional hockey in all three zones. Dexter failed to get into their game due to uncharacteristic mistakes at critical moments, such as taking two penalties during a 5-minute powerplay just over halfway through the period. Haas's work in net didn't give Dexter much of a chance to get into the game, either. He didn't have to make exceptional saves, but he stayed square to the puck and challenged shooters when needed.

Large School: #3 Loomis 2, #1 Cushing 0  (FINAL) -- Loomis junior G Kyle Chauvette blanked Cushing, 2-0, and got the only goal he needed from senior Cody Hoban with 48 seconds left in the first period. Hoban, who suffered a bad knee injury in Loomis's 7-0 loss to Avon on Jan. 29th, and was expected to be out for the season, came back for the three playoff games and today came through with a big goal when his team needed it. The other hero for Loomis was Chauvette, who was excellent, and just got better as the game went along. The third period was his best, as Cushing peppered him and increased the pressure as the period went along. In the last few minutes, he made several 10-bell saves. The New Hampshire native was the difference in this game. In the final minute, Adam Martin notched an empty-netter. Cushing played a sound game, with very good team defense. Freshman G Jackson Irving was also very good, but wasn't tested to the degree Chauvette was. In the main, this was a well-played game by both teams. Could have gone either way, but Chauvette wouldn't allow it.

Small School: #6 Gunnery 5, #8 Pomfret 3 (FINAL) 12:30 pm -- In an exciting, chippy, end-to-end game with a ton of wild goal-mouth scrums, Pomfret scored 3 first period goals to take a 3-1 lead into the second period. Alas, they would score no more, as Gunnery, powered by a hat trick from senior Zander Lizotte, scored the next four goals. Gunnery goals by Alex Jefferies (2) and Lizotte (3). Pomfret goals from sophomore Carter Rugg, and seniors Tyler Bourque, and Ryan Kosinski. Pomfret played gritty and hard and deserved to be here. A #8 seed, they beat St. Mark's and Groton in the quarters and semis, respectively. After a rough first period, Gunnery senior G Carmine Andranovich settled down and was excellent from there out.

*As voted on by the league coaches 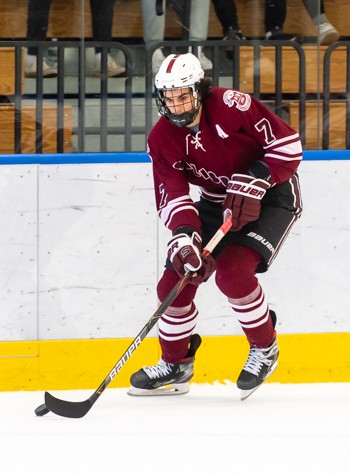 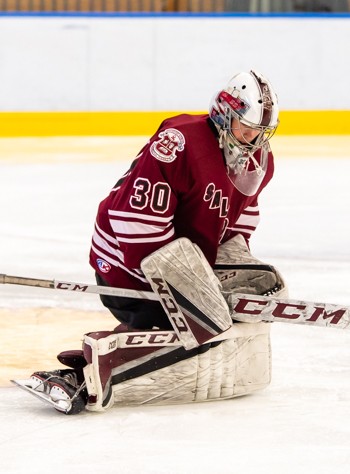 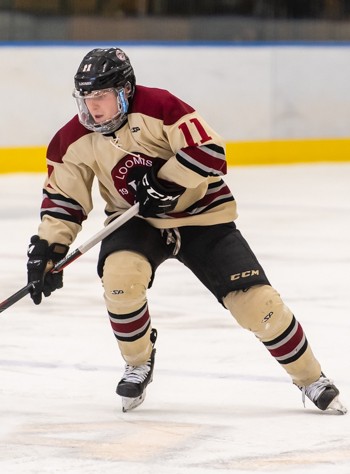 Loomis captain Cody Hoban scored the only goal that mattered (the 2nd was an empty-netter) in the Pelicans 2-0 win over Cushing in the Large School Championship Game. (Photo: Dave Arnold Photography) 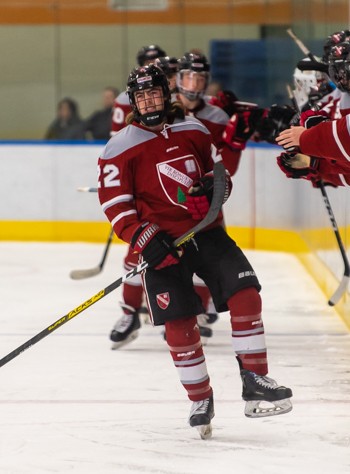 Gunnery senior Zander Lizotte had 3 goals and an assist in the Highlanders 5-3 win over Pomfret in the 2020 Small School Championship Game. (Photo: Dave Arnold Photography)